Our trip to rural Tuscany in 2017 included a day long tour through Pisa, San Giminano and Siena. The trip was arranged through Viator and included a traditional lunch at an Agro Turismo affiliated Tuscan firm.

Our guide was informative and prepared us before each site with brief background history as we travelled through the Tuscan countryside in a comfortable bus.

San Gimignano is a small walled medieval hill town in Siena, Tuscany. Its located in north-central Italy, so it was a natural choice for a stop in our Tuscany tour. The town is famous for its medieval tower houses. It has a gorgeous hilltop setting and encircling walls that form “an unforgettable skyline”. You can see this in detail in the accompanying video clip of our trip at the end of this blog .

The historic center of San Gimignano is a UNESCO World Heritage Site. The town is also known for saffron, the Golden Ham, and its white wine, Vernaccia di San Gimignano, produced from the Vernaccia grape grown on the sandstone hillsides of the area. 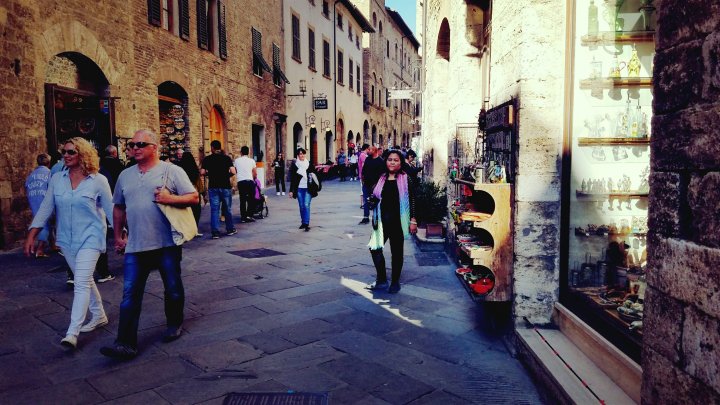 In 1199, the city established an independent commune with churches and public buildings. However, rivalries between feuding clans resulted in competing families building tower houses of increasingly higher heights. Towards the end of the Medieval period, there were 72 tower houses, some up to 230 feet tall. Today about a dozen of these towers survived.

On 8 May 1300, San Gimignano hosted the famous poet Dante Alighieri in his role as ambassador of Tuscany. Dante wrote about these towers in his famous work – “Inferno”.

The city flourished until 1348, when the bubonic plague known as Black Death affected all of Europe. About half the townsfolk died. The town submitted to the rule of Florence. There was little subsequent development, and San Gimignano remained preserved in its medieval state until the 19th century, when it was rediscovered by tourists and artisans.

You can view our YouTube clip of this tour by clicking this video link : San Giminano and rural Tuscany .