A first look at Versailles Palace

The first time encounter with the Versailles Palace, one of the largest and most beautiful royal palace in the world, is a memorable experience. Check out the below clip for a sneak peek. We will be exploring more of the palace and its world famous gardens in subsequent blogs in next few weeks. So be sure to check back to the site. Enjoy!

We recorded the song “New Beginning” a while back as part of our “For Rose” EP (available on iTunes). Years later, the theme of the song felt like a perfect blend with the picturesque settings of the Versailles gardens and it’s ominous history lurking around. Thus, this video experiment was born. We hope you’ll enjoy!

Exploring the fountains at the palace of Versailles 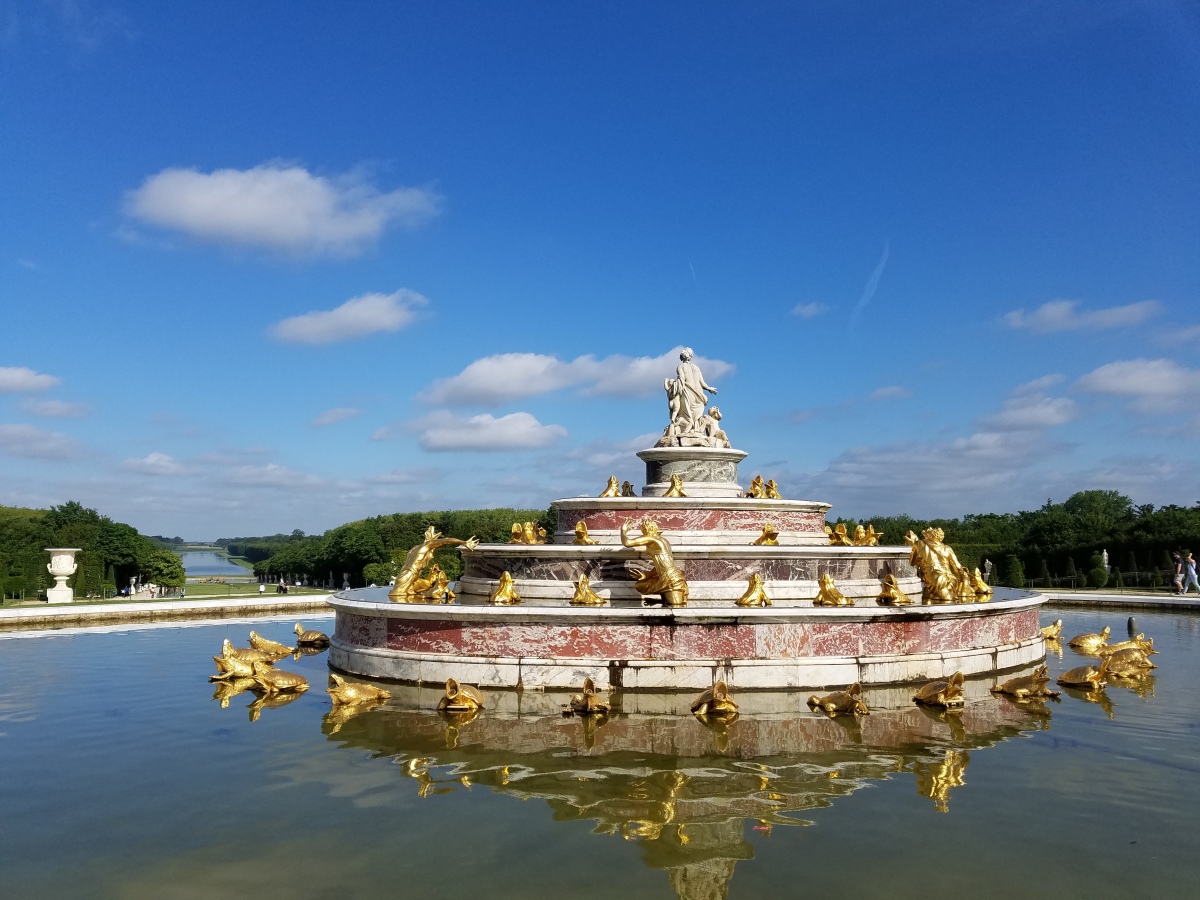 The Gardens of Versailles occupy the west part of the palace of Versailles. The gardens cover some 800 hectares of land, much of which is landscaped in classic French Garden style by André Le Nôtre. In addition to the meticulous manicured lawns, parterres of flowers, and sculptures are the fountains, which are located throughout the garden.

Dating from the time of Louis XIV and still using much of the same network of hydraulics, the fountains contribute to making the gardens of Versailles unique. On weekends in late spring to early autumn, the administration of the museum sponsors the Grandes Eaux spectacles during which all the fountains in the gardens are in full play.
The Versailles Orangery, which was designed by Louis Le Vau, is located south of the château, a situation that took advantage of the natural slope of the hill. It provided a protected area in which orange trees were kept during the winter months. I took the below picture of the Orangerie and South Parterre from the above Water Parterre.

The water Parterre adjacent to the palace is adorned with beautiful statues from Greek mythology. It also provides a magnificent view of the gardens and the grand canal. 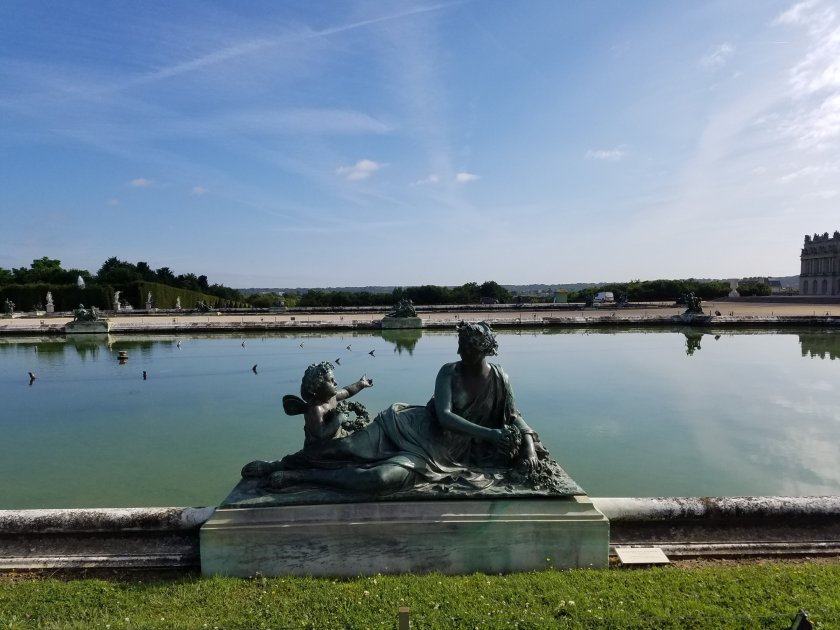 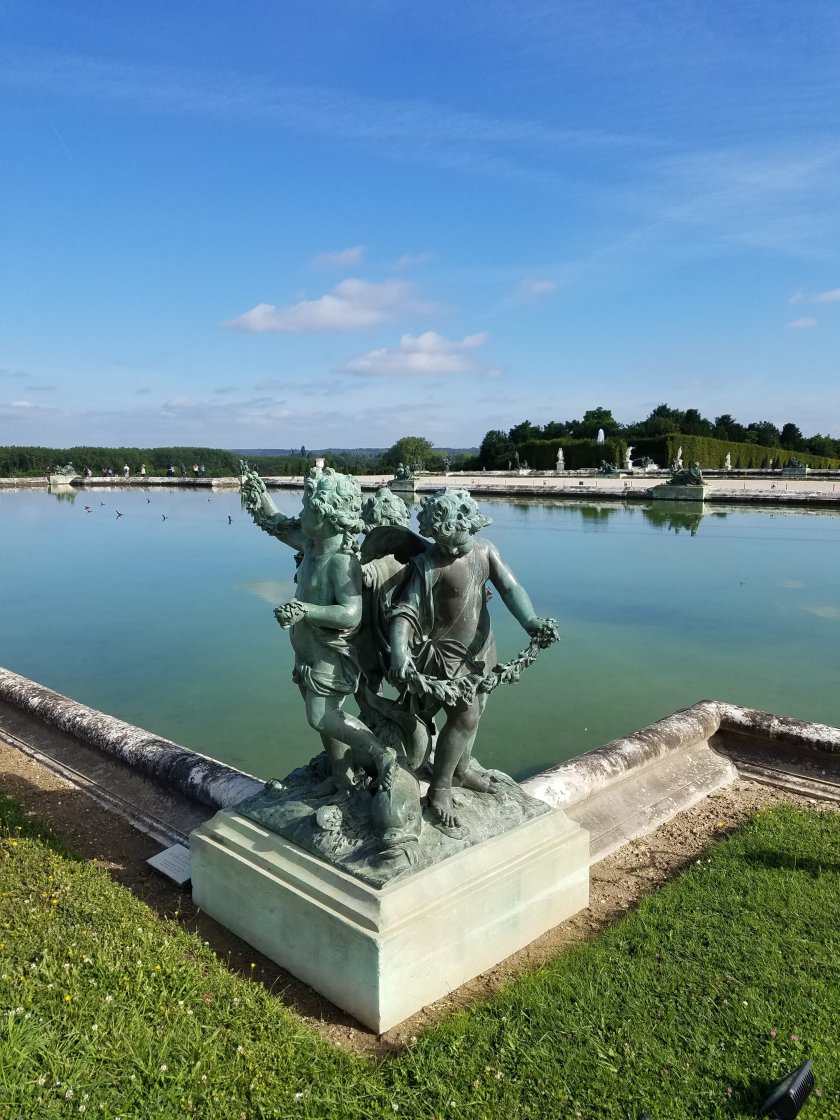 The Night Fountain comes alive with sprinkling water at certain days of the week. It acts as a connector from to the Latona fountain from the right end of the Water Parterre. 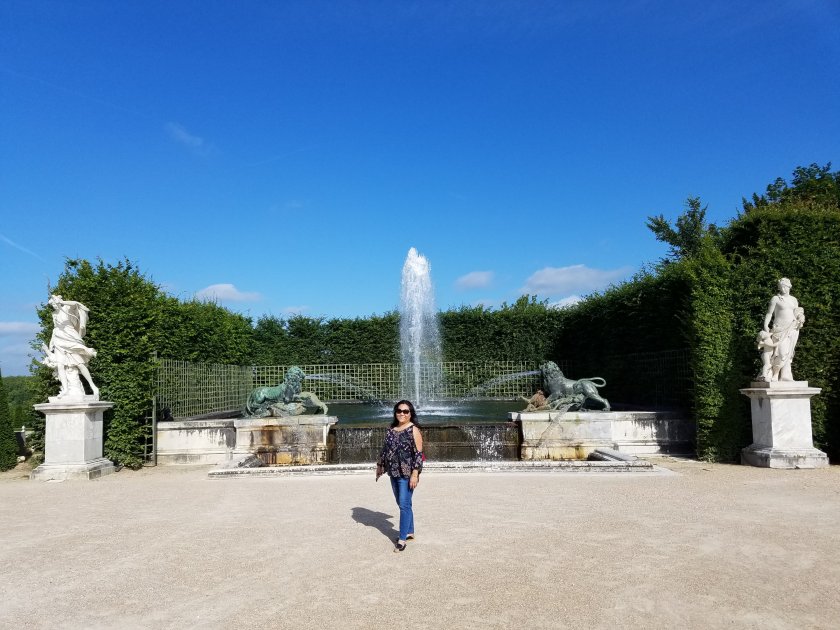 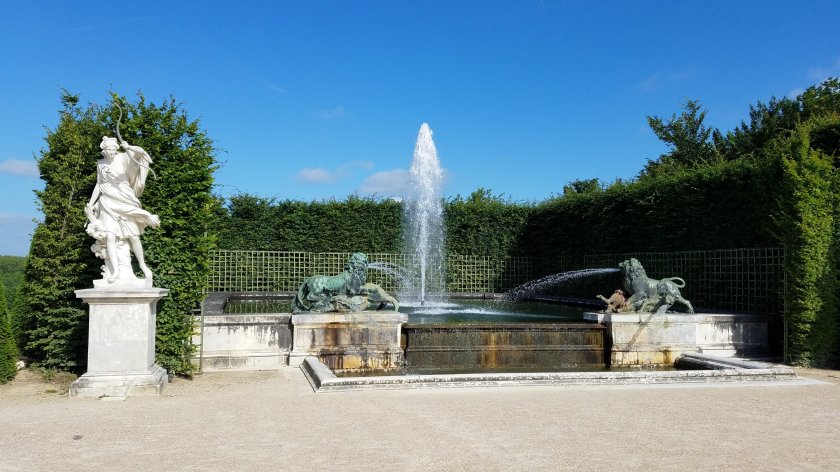 One of the main attraction in the garden is the Latona fountain or Bassin de Latone . It depicts an episode from Ovid’s Metamorphoses. Latona and her children, Apollo and Diana, being tormented with mud slung by Lycian peasants, who refused to let her and her children drink from their pond, appealed to Jupiter who responded by turning the Lycians into frogs. This episode from mythology has been seen by historians in reference as an allegory to the revolts of the Fronde, which occurred during the minority of Louis XIV. 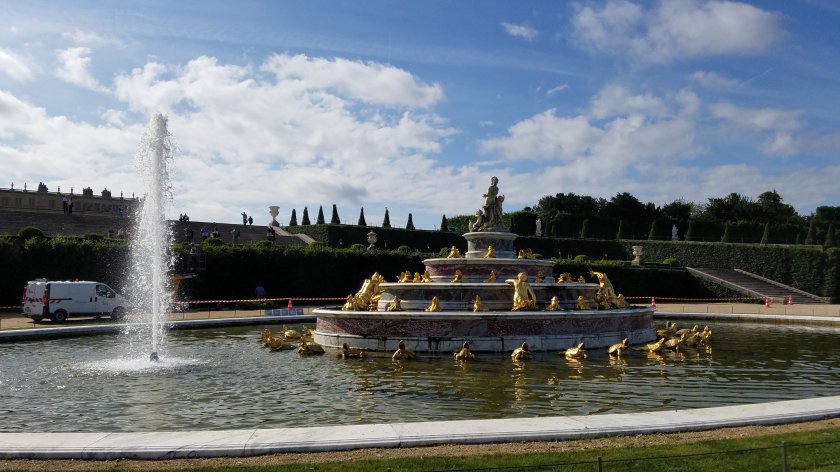 The Apollo Fountain, which was constructed between 1668 and 1671, depicts the sun god driving his chariot to light the sky. The fountain forms a focal point in the garden and serves as a transitional element between the gardens of the Petit Parc and the Grand Canal

Walking back from Apollo fountain through the picturesque King’s garden, we arrived at the mirror fountain. A 10-min water show takes place here on certain days of the week at the top of the hour.

The Saturn fountain connects the Kings garden to the main corridor that stretches from the palace to the grand canal. 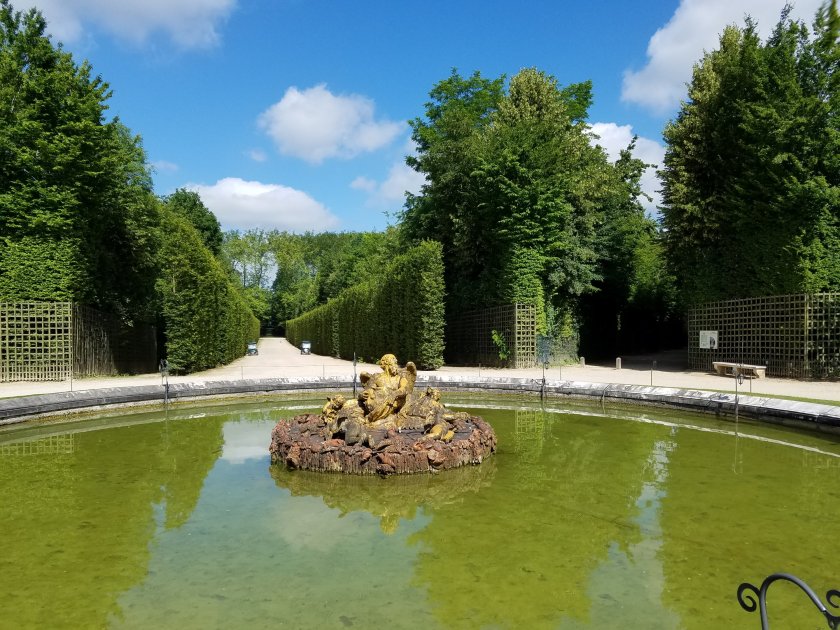 The Grand Canal was built between 1668 and 1671. With a length of 1,500 metres and a width of 62 metres, it physically and visually prolongs the east-west axis to the walls of the Grand Parc. During the Ancien Régime, the Grand Canal served as a venue for boating parties. In 1674, as a result of a series of diplomatic arrangements that benefited Louis XIV, the king ordered the construction of Petite Venise – Little Venice. Located at the junction of the Grand Canal and the northern transversal branch, Little Venice housed the caravels and yachts that were received from The Netherlands and the gondolas and gondoliers received as gifts from the Doge of Venice.

Glenda and I took a boat ride through the canal to experience the serene beauty of Versailles gardens from the lake! 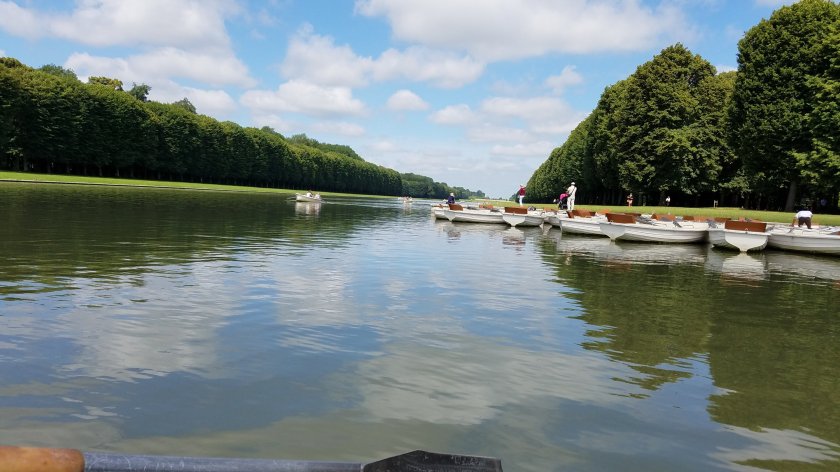 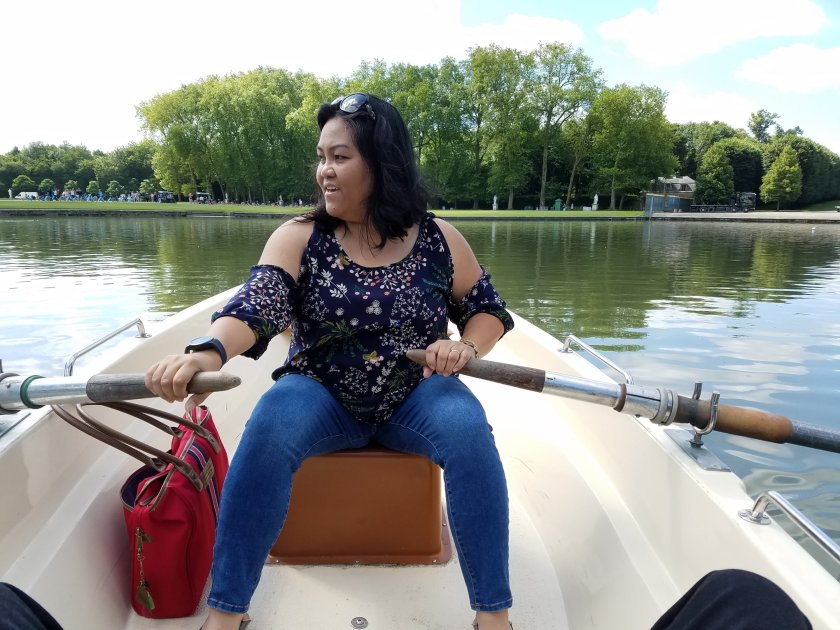 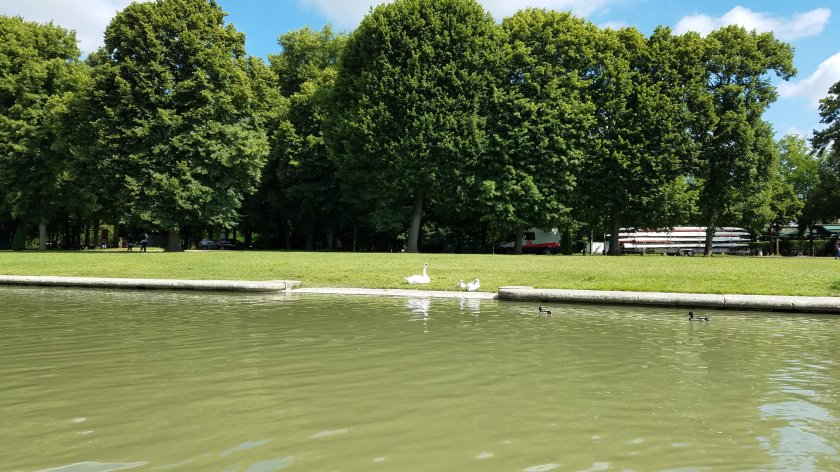 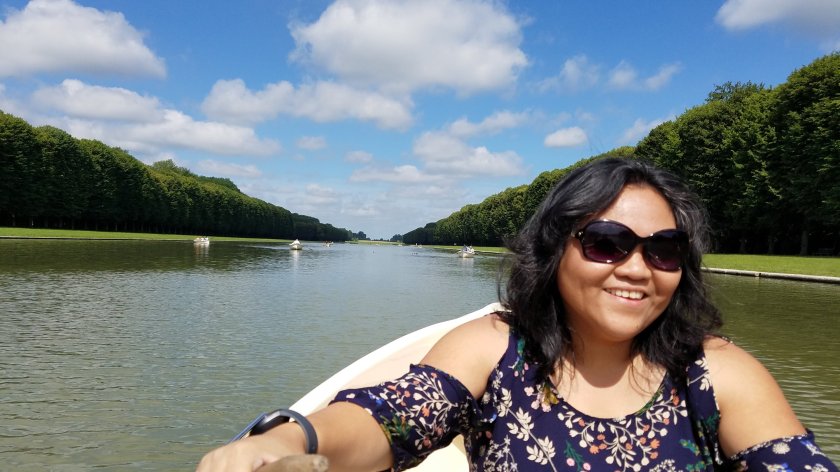 Get a full experience of the lake in the boat ride video below. Enjoy!